Who’s who in a Magistrate’s Court criminal hearing

Most courts in Australia have a similar layout. The picture below shows the layout of a Magistrate’s Court in South Australia. Around 80% of all court cases begin and end in a Magistrate’s Court. It is a busy court. Apart from differences in size and decor, higher courts such as the District Court and Supreme Court hearing criminal cases have a space for a jury.

In many higher courts, there is a physical separation between those facing the gallery, those presenting information in court (the Bar Table is where those presenting information or evidence to the court sit and stand) and the Bench where the Magistrate sits. The space between these is often called the ‘well’ and tradition has it that nothing should pass through that space when court is in session except the truth. 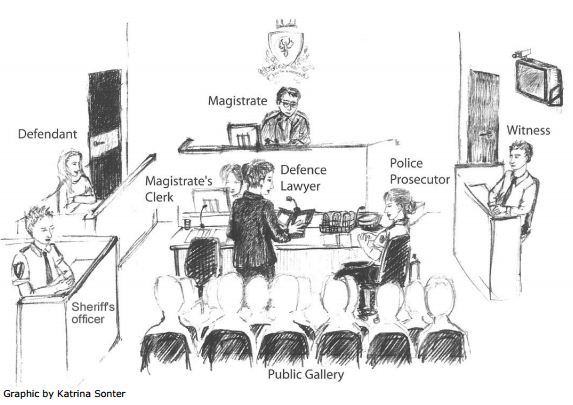 Magistrates are lawyers who have worked for at least five years. A magistrate hears evidence and decides whether a person is guilty or not guilty to an offence as charged. A magistrate imposes a penalty on those who are either found guilty or plead guilty to offences. The magistrate’s role in court is to ensure that justice is administered fairly and impartially.

Magistrates usually dress in business clothing but some now choose to wear a black robe without a wig.

The magistrate’s clerk ensures that a proper record of the proceedings of the court is maintained. The clerk records the evidence presented to the court, the magistrate’s remarks, decisions and penalties.

The defendant, also known as the accused, is the person who has allegedly committed a crime. The defendant may represent him/herself but most people hire a lawyer to represent them. Those that fit certain criteria may be able to seek legal aid.

Generally speaking, the word ‘counsel’ describes lawyers who prosecute (or claim if it is in a civil suit) and defend (or respond in civil cases). They are officers of the Court and provide ‘counsel’ or advice to the Magistrate about the law and the case.

The State prosecutes a person for a crime.

The prosecutor can be an individual representing the State, such as a Police Prosecutor or a Public Prosecutor who works for the Office of the Director of Public Prosecutions; a representative of a State or Government department (for example, a park ranger, fisheries officer); a Local Government Council (for example, a council health inspector or a council planning inspector); or a private individual.

The prosecutor is not necessarily a lawyer. It is the prosecutor’s job to provide the court with information as to the type of offence the defendant is alleged to have committed and prove beyond reasonable doubt that the defendant committed the crime as charged.

The prosecution and defence may call witnesses to present information about what they may have seen or heard. The witness may also corroborate other information.

There is only one Sheriff in South Australia but the Sheriff has more than 100 officers.

Sheriff’s Officers keep order in the court, help to bring prisoners into and out of court, and help people coming into the courtroom. They advise the magistrate’s clerk as to which defendants, solicitors and so on are present in court and if they are ready to proceed with their case. They make sure defendants do not leave court without signing any bonds, bails or orders of the court if that is what is required. In a courthouse and associated property, a Sheriff’s Officer has the powers of the police to arrest a person who misbehaves.